We have passed many times by this house, in the city of Timişoara, without even noticing it. It took a Romanian tour guide book from 1983, which was forgotten in an old library, to get us to notice the house that still keeps the Iron Tree of Guilds trunk, held in place with a metallic circle. The legend has it that in this tree trunk there are nails and targets stuck in by the journeymen who finished their specialty during the existence of the guilds. This building is also known by the name of “The Guild Tree House” and can be seen at the intersection of the Timişoara streets “Proclamaţia de la Timişoara” and “Francesco Griselini” (see map).

The extravaganza of a Macedo-Romanian trader? 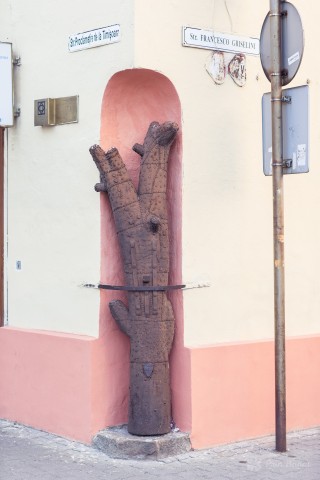 The house was built in 1752, by the baker Leopold Kayser, and, in the 19th century, it is bought by the Macedo-Romanian Andreas Trandaphill (name that was probably changed eventually to Andrei Trandafir). This type of houses, with iron trees are also found in Austria, Slovakia and Hungary.

It is said that Trandaphill, impressed by the iron trees seen during his trips and returning to Timişoara, ordered the Moritz Heim craftsman to build a copy of those, which he later attached to his house, in 1828. Even in Romania there is still another house like this in Arad.

Until 1990, the Iron Tree of Guilds suffered a series of vandalizations, reason for which the original exemplary was moved to the Banat Museum. Seven years later, the original spot was filled with a copy, made our of iron by the artist Alexandru Fota. The Guild Tree House was declared a historical monument by the Romanian Ministry of Culture and Cults. More information and legends related to the Iron Tree House of Timişoara can be found here.

No comment at "The Iron Tree House from Timișoara"