Peter Trimper is a 76 years old man and he is the last Swabian from the only round village in Romania, Charlottenburg (described here in detail). Even though he could follow the path of his brothers and leave the Banat region before or just after 1989, he chose to remain here with his parents. Today, Peter is alone, his mother and father having left this world, one at a time. We met with him on a sunny Sunday in September, when he was returning from picking plums.

There were Germans, almost only Germans.

Peter is among the few locals who can still complete the full picture of old Charlottenburg, through their memories and through the stories they heard from others. This was a village colonized during the reign of Maria Theresa, in 1772. There were Germans, almost only Germans. After that, about ten families of Hungarians came and a few Romanian families as well. Today there are only Romanians and a few Ukrainians. Only a single family of Hungarians remains.

The first ones who came have died. The climate was bad, lot of work to do… Even people from other villages such as Neidorf, Zăbrani or Frumuşel came here and completed the picture. Until 1880, when the Hungarians started to come along, only steppe covered this place. At the edge of the village, where the APC (Agricultural Production Cooperative) had its zootechny, the Hungarians counted around 150 “chains” of forest, with plains and all. He held on and, with his horses and his oxen, he worked the land. He had slaves. And most of them were Hungarians. They cleared the land. Where once there were grapevines, now you can’t even walk around because of the spines. There were two places covered in grapevines, behind the forest and around the izlaz. There wasn’t a single house that didn’t have at least 15 acres of its own grapevines. 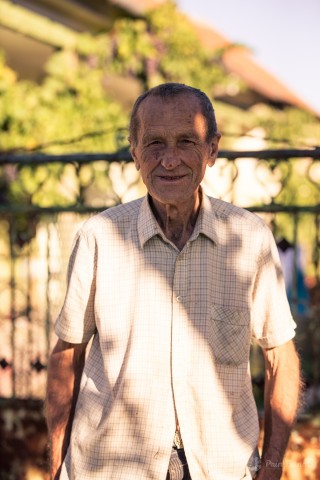 In Peter’s words, the last Swabian family left Charlottenburg after the Revolution, in the 1990’s. That’s about the same time when almost 1100 Germans left Romania. I stayed with my parents, who lived on for a few more years. My father died in 1992 and my mother in 2001. I am alone, I have no place to go. That’s how it is.

The Romanians also left. At Nadeş there is no family left. Before, there were 300 locals. Over the hill from Comlea was a village by the name of Hodoş. That was the first one to empty, in the 1980’s. It was completely abandoned. It was a village with two churches and pretty big in size. Now, at Comlea, out of 450 souls, remain only 7 or 8 natives. The rest of the village was bought by city folk. At Sintar, about 10 people are still natives. At Bogda there are more. About 40 out of 400 people are from around here.

Since the ‘70’s, they started to leave one by one. At Lipova there were 2000 Germans back in those days, while now barely 50 remain. They left. During Ceauşescu’s reign, those who had money bought and hand it over to the Security. There were some people who did this for a living, selling passports. Those who didn’t have money, left right after the Revolution (1989). As for my brothers, only two of them left before 1989 and the other five left after.

During the war, I saw from here how they besieged Timişoara.

Even though he was no older than 10, Peter remembers even today what happened at Charlottenburg and in the surrounding area during the Second World War. They didn’t get to us. There were two weeks, during 1944, when the Soviet army passed through here, knocking around the houses. Then, they moved on to the western front. From Alioş there were rumors that the Hungarians were coming, but they ran with horses and all, to Bogda. They were afraid. They didn’t come because, on 23rd of August 1944, the Romanians turned the front over to the Russian side. The Hungarians, being allied with the Germans, backed off. They came this way, from Arad, and the Romanians, backed up by the Russians, hid among gardens, canals and drove everyone crazy.

They didn’t took my mother. They said she had a baby.

The Swabians from Charlottenburg did not escape from the Bărăgan deportations, 43 people being forcefully taken from here, among which there also were Peter’s father and one of his aunts. They didn’t took his mother because she had a baby. After 9 months, they started letting them go home, one by one, starting with the sickest. Dad came back, but my aunt first went to Democratic Germany and returned after. Those who had several children were also let go. The first year was the hardest, after that, it got better. The cold was the only thing. As for food: beet leaves soup and cabbage soup. In the end, Russia got better too, when their own collective farms started to work…

In order to survive, a minority has to be more compact.

If there are two Germans, who do they marry? Romanians. Their children don’t learn German anymore. Before, in Tomnatic, half of the village was french. They also came with their teacher. In Carani (Mercydorf) there were a few Italians brought by Maria Therezia. But they got lost in time. The majority overtakes the minority. The Russians keep prospering, they had plenty of children… says Peter, referring to the Ukrainian families who still live today in Charlottenburg. There is Ştiuca, also a village around here. It was entirely occupied by Germans. Now there are only Ukrainians.

The first mistake that was made: I had an uncle who was out on the front and then remained in Germany and got married – for years he wasn’t allowed to return to Romania. The first policy was to reunite the family. He also had parents and brothers and only after 20 years was he allowed to return.

About Charlottenburg and its round form

When the village was constructed, there was a certain Neumann from Lipova. He was the one who made the round plan. It is believed that before Charlottenburg, there was another village on this spot, Bariţa. Altringen and other surrounding villages were already in place. In Neumann’s plan, the idea was that every house would have 58 ars with gardens and all. At the beginning there were only mulberry tree plantations and, in the middle of the village, where the school is now, there was a fountain that represented the center. You had to go around the side of the village in order to head towards Altringen. After 100 years, they started to build buildings in the middle: first the school, then the church was built in 1886 by the hungarian count and local peasants. We even had a mill, built by someone named Irtel from Radna, that later was destroyed, around 1968, by the communists.

We were curious to find out what was the oldest building in the village, but Peter’s answer was a vague one, being rather offended by the fact that today’s locals have stopped respecting the round form of the village and have started constructed buildings in random locations. Many buildings have been modified. There was one building there but they replaced it with another. These, over here, also changed. It was a circle but they got out on the alley and ruined it. They changed, Peter told us, pointing to the surrounding constructions that are a menace to the circular form, the only one in Romania, and the reason for which the entire Charlottenburg village has been declared a historical monument by the Ministry of Cults and Culture.