In Vlajkovac, a village situated in the Serbian Region of Banat, on the road that links Timişoara from Belgrade and only a few kilometers from Vršac, is one of the five noble residences of past times of the macedo-romanian Mocsonyi family, The castle, located in the middle of a huge park, entered the possession of the old Bissingen-Nippenburg family, through their kinship with the Mocsonyi family in 1888.

The glory period of the castle lasted less than 100 years, from the half of the 19th century until the end of the Second World War. This was when all the properties of the Bissingen-Nippenburg family, among which were also the noble complex in Vlajkovac, were confiscated and nationalized. A short time after that, the residence was turned into a CAP. A few years ago, there was a plan to restore the castle but it never got further than the paperwork. Today, the old Mocsonyi family residence has no purpose and lies in an awful state of preservation.

Beginning with 1738, more and more Romanian colonists settle here. Therefore, in 1749, the village hosted 40 houses and, until 1754 their number grows to 87. In 1761, the village officially appears on the map with the name of Weikowez.4)Samu Borovszky –  Magyarország Vármegyéi és Városai. Encziklopédiája: Temes Vármegye, Budapesta, 1914; The Emperor Joseph II, on his way to Pancevo, makes a stop in Vlajkovac between 13 and 14th of April, 1773.5)Wikipedia – Vlajkovac;

The Orthodox Romanian Church was built in 1809.6)Wikipedia – Vlajkovac; In 1832, the Room offers to the Bethlen family compensation estate in Vlajkovac. In 1845, two thirds of the estate belonged to the Bethlen family and one third was in the possession of the Mocsonyi of Foen family. Other noble families that had properties in Vlajkovac were Heinrich of Ómoravicza (Moraviţa), Jeszenszky of Jasenové and Bissingen-Nippenburg.7)Samu Borovszky –  Magyarország Vármegyéi és Városai. Encziklopédiája: Temes Vármegye, Budapesta, 1914;

During the 1848 Revolution, the Hungarian troops invade Vlajkovac and burn down the Orthodox church. At that time, the village was home to 1390 people, out of which 1375 belonged to the Orthodox faith, 6 to the Catholic faith and 9 to the Judaism faith. In 1876, a terrible storm, that rips several trees from their roots, also manages to cause the collapse of the village Romanian church.8)Wikipedia – Vlajkovac;

In 1914, Temesvlajkócz is described as a large village, located in the south-west of Vršac, with 290 houses and 1650 locals, a post office, telegraph and train station.9)Samu Borovszky –  Magyarország Vármegyéi és Városai. Encziklopédiája: Temes Vármegye, Budapesta, 1914; Seven years later, at the 1921 census, 1459 people were recorded to live here, out of which 918 were Romanians, 261 Serbians, 224 Hungarians, 34 Czechs and 22 Germans. Since 1922, the village name remained Vlajkovac.10)Ioan Haţegan – Dicţionar istoric al aşezărilor din Banat: sec. XI – XX. Atestări documentare şi cartografice, Editura ArtPress, Editura Banatul, Timişoara, 2013; Today, Vlajkovac is located in the South Banat District, Vojvodina, Serbia and has a population of 1178 locals (according to the 2002 census).11)Wikipedia – Vlajkovac;

The macedo-romanian family of Mocsonyi (rom. Mocioni, srb. Močonji), emigrated in Hungary and Banat in the 18th century, was recognized for its involvement and promotion of the political rights of romanians from the Austro-Hungarian empire. Even though they occupied high functions and were related to the great Hungarian nobility, the members of the Mocioni family had kept a firm orthodox conservatorism and they avoided the hungarization current specific to the era.

Andrei and Mihaiu, the sons of the Orthodox community priest of Pesta, Constantin Mocsonyi alias Popovicz, have split the family into two branches: one at Pesta and another at Miskolc and Tokaj. In 1780, Andrei received the Foeni of Banat estate, resulting the line of “of Foen”.12)Dr. Teodor Botiş – Monografia familiei Mocioni, Fundaţia pentru Literatură şi Artă “Regele Carol II”, Bucureşti, 1939; The Mocsonyi family had five castles in the historic Banat: at Foeni, Birchiş, Bulci, Căpâlnaş and Vlajkovac. With the exception of the one at Birchiş, that is now gone (burned in 1944), the other four still exist today.

The Vlajkovac castle was built by George Mocsonyi in 1859, in a Classic style. In 888, his daughter, the countess Georgina Mocsonyi, married the Rudolf Gábor Bissingen-Nippenburg count13)Dr. Teodor Botiş – Monografia familiei Mocioni, Fundaţia pentru Literatură şi Artă “Regele Carol II”, Bucureşti, 1939;, an old noble family, arrived from the Württemberg land14)Banaterra – Nobili în Banat;. As a result of this association, the castle was passed into the Bissingen-Nippenburg dowry.

The building was located in the middle of a huge park, surrounded by wrought iron fence and gates. Inside the park there were also the homes of the carmans, the mausoleum and the Bissingen-Nippenburg family chapel, an artificial lake with a fountain and a statue in the middle, creeks and bridges.15)Banat Info – Castel uitat-Vlaicovăţ; In 1914, the Vlajkovac castle had an electrical installation and was individually illuminated. It was renowned for its library, which contained over 2000 volumes, its interiors, which were decorated with antique furniture, and a collection of unique objects made out of porcelain and silver.16)Samu Borovszky –  Magyarország Vármegyéi és Városai. Encziklopédiája: Temes Vármegye, Budapesta, 1914;

The castle remained in the property of the Bissingen-Nippenburg family until the end of the Second World War, when all their fortune was confiscated and nationalized. A short while after, inside the castle, a CAP was inaugurated.17)Banat Info – Castel uitat-Vlaicovăţ; Today, the complex belongs to the village and has no purpose.

The castle lies in a bad state of conservation. Close to the point of collapse because of the successive acts of vandalism and because of abandonment, the building of today represents a real peril for those few curious and interested that still wish to get pass its threshold. The damaged roof eases the access of rainwater towards the support structure of the building, this leading eventually to the degradation of the building materials and the contribution to the slowly dismantle of the entire building. In her turn, the nature started reclaiming her rights: the luxurious vegetation of the surrounding park slowly swallows the abandoned walls, while some of the smaller wild animals find a convenient refuge among the columns of the noble salons of old days.

Five years ago, the local administration signed a contract of concession for a period of 40 years with an italian company. Besides the monthly rent of 220 euros, the renter was obliged through the contract to obtain the necessary paperwork and to bear the costs of the castle and surrounding park restoration.18)Blic.rs – Restoran u dvorcu; This plan included changing the building into a touristic destination by transforming it into a small 8 room luxury hotel with a ground floor restaurant with a park view. Eventually, there were 27 trucks of debris cleared from the premises and the italian investors made themselves scarce, which lead to the annulment of the contract.19)Novosti.rs – Dvorac u Vlajkovcu čeka renoviranje;

The sad situation of the castle got to the Franz von Bissingen-Nippenburg count’s ears, who was settled in Frankfurt and he publicly expressed his concern regarding the bad conservation state of the complex, stating that “it’s more important for the building to be saved, than to be returned to his family.” In 2006, the count had forwarded without success an act of restituing the castle to the Bissingen-Nippenburg family, and then, finding out about the project of the italian company, he gave his consent.

In 2010, already being in a slow process of degradation, the castle was still taken care of and cleaned periodically by an elderly lady, encouraged by the local community to occupy the few still livable rooms in the basement. Even if this care only consisted of sweeping or the gathering of the broken pieces in a corner, the locals considered that only through constant care could the building be conserved along with its precious decor elements. Their opinion was that the castle should be kept because it was a landmark of the village and an important ornament of the public park, used with great pleasure by the entire community as a traffic junction and a relaxation place.

The park, spread over a surface of 5 ha, was put under protection in 1974, due to the rare and exotic species that were found there. In 2007, the Vršac municipality administration declared that the park is a natural resource of great importance, investing annually approximately 400.000 dinari for its maintenance.20)Blic.rs – Restoran u dvorcu;

Ironically, even though it was once the main piece of the noble ensemble, the castle was reduced gradually to a simple object in a landscaping scheme. The inability to understand the main logic of the architectural ensemble, favoring the building abandonment in the detriment of the park care and usage, has definitevly contributed to its current state of degradation. But the place value is found exactly in the complexity of the relationships that exist between the castle and the park, on one side, and the urban structure and surrounding landscape, on the other.

The revitalization of the area, with long term beneficial effects, can depend therefore on the understanding and the valorification of these reports. Starting from the castle building, taken as a main and dominant piece of the entire system, the sustainable reactivation of the old ensemble can be realized only after the preliminary analysis of its potential and the detection of a proper function. Once these steps are fulfilled, the correct implementation of the development scheme depends on a clear property regime, on the assumed staging of the work and the attraction of the necessary investment funds (without which an eventual started project can end up in his turn in ruins, just like in the case of the Banloc site).

Even though today the situation may seem saddening, a correct revitalisation project of the noble ensemble of Vlajkovac can being local benefits, contributing at the same time to the economic, social, cultural and identity development of the region.

About George Mocsonyi of Foen 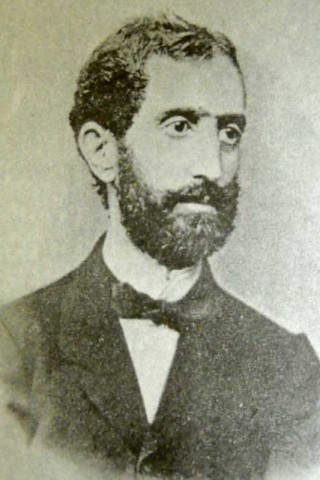 George Mocsonyi was the son of Ioan Mocioni (1780-1854) and of Iuliana of Panaiot (1787-1858). Born on 25th of May 1823, in Budapest, he attended the Law University and, after finishing his studies, he took over the administration of his estates from Vlajkovac and Birchiş.

In 1859, George married Elena Somogyi Gyöngyös, with whom he had two daughters: Livia and Georgina. In the year 1865, he was the romanian and serbian nationalists candidate in the constituency election of Moraviţa, winning with a crushing majority. Between 1865-1869, he activated in the Hungarian Diet, representing the national interests of romanians and serbians alike. At the 1869 elections, he wins again, in spite of all the measures taken by the hungarian government in fighting the nationalists and the “mocionism”.

The voters of George Mocsonyi celebrated this victory by inviting him to Vršac, where he was enthusiastically received with flags, music and pies withdrawal. On the second day, 20th of March, 1869, a banquet was held in his honor, in the evening the entire city was illuminated and the Romanian and Serbian citizens led to the train station their dear representative with the same pomposity as when he arrived.21)Albina, Nr. 39/1869. With the same success he also wins his third and last mandate at the diet elections of 1872-1875.

George Mocsonyi was a marking member of the nationalists club and a representative in the diocesan synod from Caransebeş. He always showed a great generosity towards the Romanian school students and his kindness was shows through many and discreet acts of mercy and christian love. He died on 27th of February 1887 and he was buried in the Foeni family crypt.22)Dr. Teodor Botiş – Monografia familiei Mocioni, Fundaţia pentru Literatură şi Artă “Regele Carol II”, Bucureşti, 1939;

Vlajkovac is located at a distance of 87 km from Timişoara (see the map) and 9 km from Vršac. In the town of Vršac there can also be visited the fortress tower, the Eparhie Castle of Banat, the Sf. Gerhard Roman-Catholic Church, the Step Pharmacy. the Vršac Museum or the Sterija Museum. The Deliblata sand dunes, a unique region of Europe, are located only 33 km from Vlajkovac (see the map).

Images of Mocsonyi – Bissingen-Nippenburg Castle taken in June 19 2015 and sent to us by Miruna Crâşnic. Thank you!