The village of Caraşova is located in the Caraş-Severin county, at the entrance to the Caraş Gorge. It benefits from the charming natural surroundings and it is also a starting point for the trail towards the National Park Semenic-Caraş Gorge, one of the most important touristic trails of the mountainous area of Banat. At the same time, Caraşova is well known due to the origins of its citizens, which stood at the base of many published studies for the last two centuries.

Even though, today, many locals claim to be Croatian or Serbian, until not long ago, they claimed to be just “Caraşoveni” and speak the language “Caraşoveană”. Near the village of Caraşova, in the Romanian area of Banat there are still six villages that have Caraşoveni citizens in their ethnic background.

The history of the Caraşova commune is tightly connected to the Caraşova Fortress, which is located on one of the high cliffs, on the right side of the Caraşova Gorge, at an altitude of 450 meters. These ruins can be seen even today, the fortification being known as Turski Grat or The Fortress of the Turk. According to historic sources, the fortress existed before the actual village and had for a short time the role of shield against the foreign invaders.1)Mihai N. Radan – Graiurile caraşovene azi. Fonetica şi fonologia, Uniunea Sârbilor din România, Timişoara, 2000 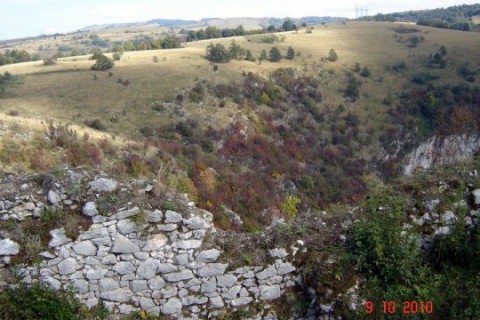 Although some voices sustain the existence of this fortress before 896, the first documented mentioning of the Caraşova Fortress dates back to the 1200s/1230s, under the name of the Castra Regalis (the Royal Fortress).2)Mircea Rusnac – Excursie istorico-turistică la Cetatea CaraşovaAfter that one, there are a few more mentionings: in 1247 (Castrum Crassou) , 1266 (Castrum de Karassou – which belonged to the Hungarian Crown), 1333 (Karasow), 1358 (Castrum regiae maiestatis Crassou), 1389, 1390, 1437 and 1520 (Castellani de Crassofew). In the year 1551, it is conquered by the Turks who, afterwards, advanced towards Timişoara.

In 1595, the armies from the Ardeal region, initiated by the Christian League reconquer the fortress. After this event, the location loses its strategic and military stand and it ceases to be mentioned in the documents of that time.3)Mihai N. Radan – Graiurile caraşovene azi. Fonetica şi fonologia, Uniunea Sârbilor din România, Timişoara, 2000 The fortress covered a surface of 2500 square meters and was built out of stone blocks. Inside the room, today, there are still remains of a circular water reservoir, of which a legend tells that it used to be a deep well carved right into the stone and that reached a cave right under it. (…) the legend can’t be entirely excluded, because right underneath the fortress, on the Caraş bank there is a cave liable to inundation and rightly named “Cave under the Fortress”. The discovery of this cave is in favour of the popular tradition’s credibility.4)Mircea Rusnac – Excursie istorico-turistică la Cetatea Caraşova

A short history of the Caraşova village

In the Middle Ages, Caraşova was an urban commune, that even had a defensive fortress. In the decimal papal lists of 1332-1337, Karasow was the center of an archdeacon from the Cenad diocese. Throughout history, depending on the administration, Caraşova was mentioned under different but similar names.

In 1358, there appear to be two communes with the same name, Nog Carassou and Kyskarassou, both of them having Bozorad as mayor. He stands against Zocol’s introduction to any of the Recas possessions, so, one night, he gathers a few miners and goes for Zocol’s house to burn it down, in order to make him go away.5)Nicolae Ilieşiu – Monografia istorică a Banatului, Mica Valahie, Bucureşti, 2011 The Franciscan monks, that came from Bulgaria, Bosnia and Dalmatia, were present in Caraşova since 1366 until 1875, excepting the 1721-1740 period, when they were chased away by the Jesuit monks.6)Mihai N. Radan – Graiurile caraşovene azi. Fonetica şi fonologia, Uniunea Sârbilor din România, Timişoara, 2000

In 1437, the commune was the property of the Orbonaş family. In 1550, an understanding between the Caransebes locals and the citizens of the Crasso oppidum was mentioned, which stated that they should help each other, even though this was already applied since early times. In 1673, Osaman Paşa required 14 “aspre” (Turkish silver coin) from every house of Karasevo. Among the notes of Marsigli from 1690-1700, the Karaseva commune was located inside the Vârşeţ district. In 1717, Karasova had 400 houses, being a significant religious and administrative centre and one of the biggest settlements after Timişoara and Caransebeş.

On both Mercy’s map from 1723 and a military map from 1761, the commune appears under the name of Karaschova or Caraschova (with the same name appearing even on Griselini’s map from 1776). In 1781, in Caraşova there were two teacher post available. One was occupied by Peter Turniu and the other one by Marco Dobra, both of them being Caraşoveni by origin.7)Nicolae Ilieşiu – Monografia istorică a Banatului, Mica Valahie, Bucureşti, 2011

When talking about the occupations of the old times, J. J. Ehler observed that “The Carasova Circle, in which Roman-Catholics are most likely to live (Ehler was wrong, the population being actually of Slavic origin and from the south side of the Danube), is entirely located in the interior of the tallest mountains. The occupations of this circle did not imply the raising of cattle, which were only small in size, being concentrated mainly on the following three occupations: the raising of sheeps and goats which were also sent to other districts; the boiling of a certain type of brandy made out of mirabelle plums and plums, which were found here in large quantities, and then sold all over the Banat region; and also the carving of shingle and barrel staves, which were usually sold around the plain areas.”8)J. J. Ehler – Banatul de la origini până acum – 1774, Facla, Timişoara, 1982

The elders say about the commune that it was initially located on a platform known under the name of Buj, in the place called Selişte, where there would have also been a church.11)Mihai N. Radan – Graiurile caraşovene azi. Fonetica şi fonologia, Uniunea Sârbilor din România, Timişoara, 2000From a morpho-structural point of view, both in Caraşova as well as in the surrounding area, there are several mix structures (geometric-irregular).12)Teodor Octavian Gheorghiu – Locuirea tradiţională rurală din zona Banat-Crişana: elemente de istorie şi morfologie, protecţie şi integrare, Timişoara, 2008 The Roman-Catholic Church from Caraşova dates back to 1726.

The origin of the Caraşoveni people

One of the most interesting and mysterious aspects tied to Caraşova is the origin of the people who live here. Their specific features attracted the attention of linguistic, historic and ethnographic researchers who have published many studies with contradictory opinions regarding the origin, national belonging, religion, migration period and place from where the Caraşoveni people have migrated. Some consider them to be from Bulgarian or Czech descent, others consider them to be Slavic (but not Bulgarian) or a mix of Bulgarian-Albanian-Clementin, Romanian-Serbian, Serbian-Croatian etc.

A man from Caraşova, Ivan Gluvak, wrote in a document, dated on 20th of July 1933, the following: “Our Caraşoveni ancestors, when they first came here, in Hungarian Country… are from the old Serbian Country, Turkish Bosnia like Bosnians – the Caraşoveni people that have come here, from there, the Krusevac city – they brought the name of Craşoveni, Krusevo – <<Cruşevilianii or Craşoveni>>. Therefore, they are not named after the Karasevo River (Caras), but after the Krusevo city from Turkish Bosnia… because Krusevo is neighbour with Albania, where this kind of language is spoken.”

Regarding the religion of the Caraşoveni people, in his book about the Caraşvean folklore, Ivan Birta reproduces the following text from a 19th century letter: “Our ancestors have been here for almost 500 years just like the Serbians from the Old Serbian Country, Turkish Bosnia… we speak Serbian, follow Serbian customs… but only the Serbian religion was changed by the Catholic priests and they have taken us into the Catholic religion.”

Until the year 1990, most of the locals from these villages were considered, simply, as Caraşoveni and their native tongue was Caraşoveana. Some studies highlight even the fact that it was impossible to convince a Caraşovean that he was a Serbian, Croatian or Bulgarian because they considered themselves to be a separate population, with a unique language. Despite this fact, during the Communist regime they couldn’t declare themselves as Caraşoveni because there was no such heading, and therefore they were registered as Croatians.

In the census of 5th of January 1977, in Caraşova there were 3420 Croatians, 75 Serbians, 131 Romanians and 203 others. After 1990, the option of declaring themselves as Caraşoveni reappears and which leads to the census of 7th of January 1992 when in Caraşova there are registered 1755 Caraşoveni, 93 Serbians, 499 Croatians, 133 Romanians and 149 others. Today, in the context of political, economic, social and cultural factors from Central and Eastern Europe, the majority of the population continues to declare itself as Caraşoveni, others Croatians and just a few, Serbians.13)Mihai N. Radan – Graiurile caraşovene azi. Fonetica şi fonologia, Uniunea Sârbilor din România, Timişoara, 2000

In the summer of 2013, on our way to Resiţa, we passed for the first time by Caraşova and we were charmed by the sights of this place. In the month of august 2014 we went back in order to take a few photos. A detail that took us by surprise in a good way and that is predominantly found in Caraşova is the care which the locals show to their households, most of the homes being very cared for and beautiful, no matter if they are old or modern. Even in front of the old houses there are flowers planted and the grass is always cut.

From Timişoara to Caraşova you can travel on the DN59/E70 and DN57 (see map), the village being only 18 km away from Reşita. Inside the commune there is, at least, one restaurant where you can have lunch. Near Caraşova there is also the Mill Ensemble from Gârlişte (see the photos below), the Oraviţa-Anina railroad and the Tower on the Hill from Grădinari.

Also, Oraviţa is only 47 km away from where you can see the Old Mihai Eminescu Theater, the first such edifice on Romania’s actual territory or the first montanistic pharmacy, today turned into the Montanistic Pharmacy Historic Museum.

2 comments at "The village of Caraşova"